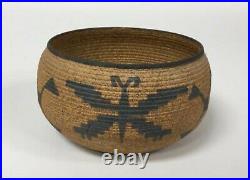 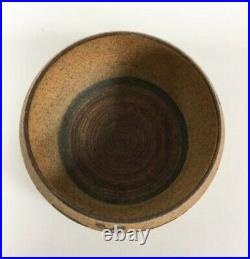 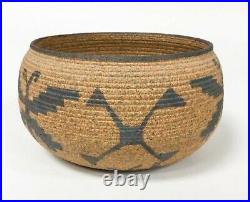 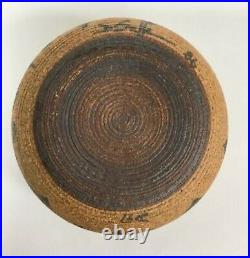 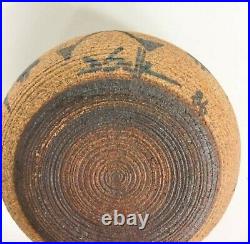 Upon winning, if you want an invoice with your options and actual cost, please message us and request it. If you absolutely want the method you chose, please immediately message us to let us know. In many cases, our cost comes out lower than the quoted price. More often than not, it is much less than quoted.

Basket pottery by David Salk. These hand-made, one of a kind pots are made by David to commemorate and preserve the patters of baskets of Native Americans. Southern California, C 1997/98 There are two numbers on this that can be a date. One that is either 86 or 98 and another that says D 97. It measures 3 1/2" tall x 5 3/4" wide.

You are entering a world of magic where ceramist David Salk, turning clay into beautiful and functional pottery, is integrating past, present and future! David is resolved to preserve the beautiful work of the Native American people for present and future generations by replicating antique basket designs in long lasting, high fire pottery. These "clay baskets" are the unique work of David Salk representing the work of Native American women of the late 1800's and early 1900's. David is also trying to preserve and popularize the beautiful rock art found throughout the Southwest as well as the stunning and intriguing ancient pottery designs of the Anasazi, Mimbres and Pueblo cultures that thrived in this same area over a thousand years ago. This pottery is highly glazed and functional and can be enjoyed as unique and stunning serving pieces.

Some day in the future say, 60,000 years from now archaeologists will be digging through ruins in what used to be California, Texas, New Mexico, and they will strike the hard surface of a pottery shard. Piecing fragments together, they will discover a most remarkable vessel, pottery, but with the form of an ancient Native American basket. As they wonder over the intricate woven designs baked into the clay basket's unglazed surface, they will be admiring two levels of artistry: the pottery of 20th century ceramicist David Salk and the basketry of 18th and 19th century North American Indian tribes. "There are so few basket weavers left now, it's become something of a lost art, " Salk said in an interview from his picturesque mountain home.

Every time I make a basket it becomes a little like a fossil. I bake the design into the clay with iron so it's there to stay.

My baskets should last 80,000 to 100,000 years. My hope is that someone in the future will find the pieces and will appreciate these magnificent designs then as much as I do now. Salk, 39, said his love of Indian basketry has been with him since he was a child. His family, which includes his uncle, Dr. Jonas Salk, the microbiologist who developed the first successful polio vaccine, has always sensed its kinship with all of humanity, he said. His mother and father, both successful veterinarians, used to deliver medicines, food and clothing to the Navajos in the Four Corners area of Arizona and New Mexico. As a young boy, he would travel with his parents to the most remote stretches of the reservation. The impressions developed on those early trips have lasted a lifetime.

His sense of comfort with and appreciation for Native Americans held him in good stead when, eight years ago, he earned an opportunity to study with famed San Ildefonso potter Maria Martinez. A friendship formed during this experience that lasted until her death in 1983. "Working with her was absolutely the highlight of my life as a potter, " Salk said with evident wonder. She radiated a nobility of spirit that was the most moving thing I've experienced. If I could be just a fraction as gracious and humane as Maria was I will feel like I've accomplished something?

Salk learned much during the time he worked with Martinez, he said. The most important lesson was how to be still, how to be calm inside and go about the business of creating a pot without being anxious about the result, how to keep working when the process didn't go quite right without being angry or upset. I learned a kind of patience that I never would have absorbed any other way.

I just loved working with her. I've never enjoyed anything more, he said. And from her approach I developed a relationship with the Earth that I wouldn't have known otherwise.

She never took from the earth without giving something back. If she took clay from a certain place, she would make an offering of corn to show her gratitude. That kind of reverence made me much closer to my work than I'd ever been. I see now the privilege in my life.

Although Salk occasionally produces other ceramic work, he focuses primarily on the clay baskets. They are part of the privilege he speaks of and even a brief conversation with the potter reveals that the baskets are also part of his calling. Creating a clay basket is painstaking work.

First Salk shapes the clay in basket form and gives it the right texture. Then he gives it its first firing at 1800 degrees to fix the shape. After this bisque firing comes the meticulous work of using tiny brushes to fix the pattern inside and out with iron guaranteed to outlast its creator. At this point, the medium becomes very unforgiving;' Salk said.

It's very easy to smudge or smear. You don't just paint the decoration on.

To decorate an average sized pot takes about 15 hours of intense work, he said. Salk said he didn't want to use glaze on his baskets because he loves the look and texture of the natural clay. Contemporary potters are'glaze crazy;' he said, and he doesn't want to join in the madness. He selects clays for their color and texture so they can accurately capture the patina and feeling of the old baskets. Then, except for the decoration, the natural beauty of the unglazed clay is allowed to freely express itself. The basket is then fired a second time at 2400 degrees, the temperature required to fire porcelain. This high-temperature firing fuses the iron permanently into the body of the clay itself, creating. As Salk calls it, a fossilized version of the basket. The baskets are now on Earth to stay. When Salk speaks of the basketry of the Apache, Maidu, Pomo and other tribes, it is with an almost mystical reverence. The baskets were a part of their lives, he said. They were created with beauty, but for very practical purposes, and the old baskets that are in museums and collections today accompanied these ancient people through every aspect of their daily lives. "It's almost as if the baskets are alive;" he said.

They breathe, they have stories to tell. They're not completely inanimate. Not surprisingly, Salk has begun to collect baskets himself. This is no easy feat because the really fine old baskets are so rare, and so expensive.

And therein lies the reason many decorators and collectors have begun to appreciate Salk's work. The best ancient baskets cost thousands of dollars. According to Bill Bobb, owner of Cristofs in Santa Fe, where Salk's clay baskets are shown. Recognition continues to build for Salk's work for the past three years he has won first place in ceramics at the prestigious La Quinta Arts Festival near Palm Springs, California.

He has been featured in several prestigious magazines, and the editor of Ceramics Monthly has said that Salk's work is completely unique in the field of ceramics. If you are a collector of Native American Pottery, Jewelry, Kachinas, baskets, and hard-to-find items, please put us in your favorites so you can be notified of our new items as we list them. For your convenience, we're providing a snapshot of each carrier's rate changes at this time. If we underestimate, we eat the difference.

The discount varies by location, size and weight so there is no way for us to predict it. Sometimes, it's significantly less. We do our best to guess the box size and weight.

Be sure to look at the difference in price by selecting each service type for the estimate. When Listing, we are forced to guess at the weight and size of the box before it's even packed. We DOUBLE BOX (with a peanut buffer) 99% of our POTTERY and most other items except jewelry, which gets its own special treatment.

We've had many, many elated customers who received a severely damaged, partially crushed, wet, pierced, etc. OUTER box but found their item safe and sound in the INNER box. We use appropriate crush strength boxes and do not skimp on packing materials. Nothing worse than a beautiful irreplaceable one-of-a-kind damaged item.

We recycle materials whenever possible to be environmentally friendly. We do monitor daily progress on all packages as we are far from apathetic. So, should some delay occur, please be patient and know we are on it and just as frustrated as you are. We've never had a package lost in 24 years.

We are not liable for packages left on doors and stolen. If you require a personal signature, please notify us BEFORE paying so we an send an accurate invoice.

Even this is no guarantee as some providers have opted to sign for you that they left it (a lot of good that does). Please consider the pictures, therefore, 95% of the description. We do not claim to be experts. We are simply provide great pieces at reasonable prices to create a great value.

We do our best to document all items accurately and to the best of our knowledge. PLEASE examine all pictures closely as they constitute the majority of the description. The only reason we will accept a return is if we misrepresent an item by accident We are human.

This is our #1 priority. If there is a jewelry hallmark, we will do our best to identify the artist.

If you are a collector of Native American Pottery, Jewelry, Kachinas, baskets, and hard-to-find items, please put us in your. Favorites so you can be notified of our new items as we list them.

If you are a collector of Native American Pottery, Jewelry, Kachinam, basketry, and hard-to-find/unusual items in great shape, please put us in your favorites so you can be notified of our new items as we list them. Please check out our other auctions both under. This item is in the category "Collectibles\Cultures & Ethnicities\Native American: US\Non-Native American Crafts". The seller is "lcbergh" and is located in this country: US. This item can be shipped to United States.